The spaying/neutering of dogs and cats is widely regarded as the single most effective means of controlling their population growth. The estimates of dogs and cats worldwide range from 950 million to 1.5 billion, the majority of which are un-owned, un-fixed, and struggle to survive. Spaying and neutering can contribute to reducing animal suffering.

For those who belief it’s not fair to deprive animals of their sexuality, consider this: animals have different consciousness from humans, and it is fairly safe to assume that they do not miss the ability to procreate. The suffering caused by overpopulation is a surety, however, and you can help to make a difference. Please consider spaying and neutering your animals and supporting organizations that do so. There are many organizations that offer low-cost or no-cost spaying and neutering. Check online with local, national, and international humane societies, animal welfare organizations, and local government.

If each of us did something about animal overpopulation, our impact could be vast. 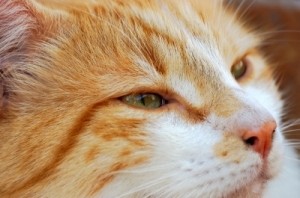 Four winters.  That’s how long I was there. I remember each icy blast, each deep snow, and the mice far beneath, tucked into burrows I could not hope to reach.  I slept beneath the bramble and awakened with snow perched on branch and fur.

On the days when the creek’s ice cracked along the edges and snow melted in rivulets toward the pond, I knew I would not go hungry.

Four summers.  That’s how long I was there.  Other cats came and went from this place, and I fought often and hard for hunting rights, for the right to walk this piece of borrowed earth for a time.

You saw me one summer’s day, skirting along the edge of the forest.  I saw in your eyes compassion and distress at my gristly body.  You turned and disappeared inside, then returned with two small, circular objects, one with silvery water, the other with luscious scents.  You placed them at the garden’s edge and spoke softly to me:  “This is for you.”  I blinked slowly at you, acknowledging.

The scent of food brought back fragments of memory:  an old woman, a petting hand, a warm house.

I ate and drank my fill, then slipped off into the forest.  You watched.

Four days.  That’s how long you fed me.  On the fifth day, you placed a steel box on the ground with food and water inside.  I walked around it, wary, sniffing.  It smelled of other animals, and I sensed that you meant to trap me.  What I did not know then was that you would have taken me in and cared for me.

You dreamed about me that night—do you remember?  You stood on the back porch as I walked away, leaning into the wind.  I turned back toward you, my face round and scarred, my eyes telling you wordlessly: I will not return.  Did you remember every detail of the dream as you awoke, as if it were real?

Four days.  That’s how long you continued to set the trap with food and water.  On the fifth day you peered for a long time at the place where you had seen me in the dream.  Then you put away the trap and scattered the food in the forest for other animals to find. 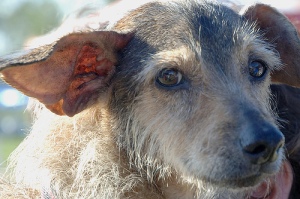 Why do I inconvenience myself to help an animal in need?  I’ve been known to be late for meetings, wading into the field alongside the road to call a skinny, scared dog to me and deliver him to the SPCA so that he can be helped, reunited with his owners or placed in a caring home.  I’ve been known to humanely trap a feral cat, have her spade, release her, and provide ongoing food, water, and shelter to her.  I’ve been known to adopt a rescue cat, a rescue dog.  I’ve been known to telephone for help and wait by the side of an struggling, car-struck deer until animal control arrives to put it out of its misery.  I’ve been known to contribute to neutering costs for people in financial hardship.  Why, I’ve been asked, why?

The reason:  because I feel deeply, can empathize with the feelings of others, and I care about the suffering and experience of individual animals.  Of course animals can feel pain and fear.  Of course they can suffer.  I have a commitment to myself to do what I can to help, and it turns that with minimal effort, I can do a lot more than I originally thought I could.  Doing so allows me to live in peaceful alignment with my values.  Yes, it can be a nuisance at times, but it’s worth it.  In the bigger picture, it doesn’t require that much of me, really, to help a creature to experience less pain, less hunger, less thirst, less bitter cold.

What if each of us committed to helping an animal in need?  It’s so much easier to turn away, but that small sense of satisfaction that comes from bringing relief to another sentient being is a reward in and of itself.  I am immensely grateful for the ability not to turn away. 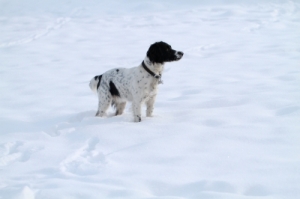 Please bring your animals inside.  Fur helps but doesn’t do much in icy winds and frigid temperatures.

If you keep your dogs or cats outside, consider what it’s like to have cutting winter winds blow through your fur.

Please, have a heart.  Bring dogs and cats inside.  They feel pain too.

photo courtesy of Spaniel in the Snow by Tina Phillips, freedigitalphotos.com

There is a lane I recall, somewhere deep in dim memory.  I see it snow covered and winding and edged by black trees.  It is the way home.  I never returned there.
© 2014 Carolyn Cott

He lifts his nose to the wind and sniffs.  Something new.  With his head still resting on his paws, he opens his eyes and sees a flash of a ginger-colored cat, skinny and in pursuit of something, at the far end of the alley.

Ollie climbs out from under a pile of rags and cardboard and stretches, keeping an eye on the cat.  The cat pounces and misses as the mouse leaps into a small hole in the brick wall and disappears.  The cat saunters into the one ray of sunlight angling between the tall buildings, sits down and begins washing herself.  The sun sparks on her ginger-colored fur.  Her movements are measured and deliberate.  Her eyes are slits, but she sees, she knows he is there.  She is watching.

It’s been three days now that the cat has appeared in his alley.  He thinks of it as his alley because he’s been there how long now?  Maybe two months, maybe four.  He remembers coming there.  There was snow.

The man had hunched over the steering wheel, his jaw set.  Ollie wanted to enjoy the car ride, but something was very wrong.  The kids weren’t there, although the back seat smelled vaguely of peanut butter.  The woman wasn’t there.  She had cried and stroked his fur before the man unchained him and yanked him toward the car.  The woman had whispered something to the man, who swung around toward her, his teeth clenched, saying, “No.  No.”

The man stopped the car on a deserted street.  He looked both ways before opening the back seat door, pulled Ollie out by the scruff of the neck, and sped off.

Ollie ran after the car as it moved farther and farther away, turned, and was gone.  He memorized the place where the car had turned.  It might be important.  Panting, he sat down, only then noticing the coldness of the snow.  He looked around.  The sun had just risen, casting chilly light on the faces of the buildings.  There were no people.  A tattered awning blew in the wind. A spear of an icicle crashed onto the sidewalk.

For two days Ollie ate only snow to quench his thirst, but it made him shiver.  He wandered the streets, looking for a familiar landmark and searching for food.  Then he found the alley.  It smelled of garbage and food.

Ollie tucked himself behind a stack of wooden palettes and waited.  A man in a stained apron pushed his way out a door and heaved a luscious-smelling bag into a dumpster.  When the door clanged shut behind the man, Ollie scampered up a pile of cinder blocks and bricks, dropped down into the dumpster, tore at the bag with his teeth, and ate.

He fell into a routine, wandering the streets in the night and returning to his alley in the early morning when cars and people came into the streets.  He had learned it was not good to be out when people were on the streets.  There was an afternoon when the boys chased him: chubby-cheeked, dressed in blue uniforms, with book bags dragging behind them, they ran after him pitching stones at him.  Most whistled past, but one hit.  He yelped and slowed down, and the boys laughed.  They were almost upon him when he ran again, cutting across a busy road and turning a corner to lose them.  Returning to his alley exhausted and thirsty, he went to the low depression in the concrete at the base of a downspout looking for water, where a small puddle remained.  Then he curled up into the tightest ball he could, and slept.

photo by Dan courtesy of freedigitalphotos.net