He closes the door of the red pick-up truck, repositions his gun over his shoulder, and sets off into the woods.  Despite trying to ease his weight onto the twigs and leaves, toe first then heel, his footfalls snap and crackle and echo through the pre-dawn forest.

A doe lifts her head from foraging, her button-black nose twitching with scent-taking.  With noiseless ease, she lopes off, her white tail high.  A groundhog stands on the crest of his mound-home squinting into the distance, his forepaws tucked up to his heart, his teddy-bear ears angled forward.  He squeaks and retreats inside his burrow.  A flock of quibbling sparrows wheels off into the sky.  Only the cat remains.   She is motionless except for the white tip of her tail. 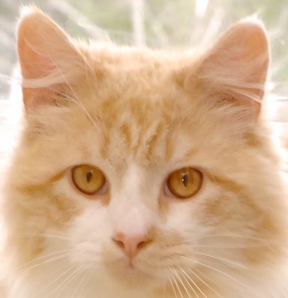 The hunter walks on, pausing from time to time, looking around, then moving on.  The cat follows, unnoticed, at a distance.

When the sun has climbed well above the horizon, the hunter sits down on a large, sunny rock.  He opens a thermos of steaming coffee, crinkles flat the wax paper covering his sandwich, and munches thoughtfully, his head angled to the side.  Sun-warmed and drowsy, his shoulders relax and he closes his eyes.

The cats comes closer, soundlessly.  She sits a few feet in front of him and looks up.  The hunter opens his eyes and startles, then feels foolish.  He mutters something about cats—he’s never liked cats.  He glares at the cat and looks into her gold eyes.  She holds his gaze evenly.  He sighs, then he breaks off a small piece of cheese from his sandwich and tosses it on the ground.  The cat eats it and looks up expectantly.  The man breaks off a larger piece and holds it out to her.  She gracefully leaps onto the rock, and with one paw on the hunter’s leg, she gingerly takes the cheese from his hand.  The hunter slides his broad palm down her back, then offers her the rest of his sandwich.

After a while, he gathers his things, slings the gun over his shoulder, and sets off.  The cat jumps down and follows.  Twice he looks back over his shoulder.  He opens the truck door and sweeps his arm wide in a welcoming gesture. The cat jumps in, settles herself on the passenger seat, and washes her face.

Two seasons have passed since I found my hunter.  He wasn’t much of a hunter, really—I could read that much in the way he moved.  It was plain to me that he wasn’t really interested in hunting as much as he was playing a role.  It was also plain to me that he thought he didn’t like cats.  Most people who give cats a chance find they like them after all.

These days I wait by the window for my hunter.  He comes in with a blast of cold air.  I jump down and wind my way around his legs.  He stoops to pet me and says a word or two.  Then we pass a companionable evening in silence.  His gun is in the attic, tucked away forever.

• • • Have you ever rescued an animal?  Please tell us about it: Untoldanimalstories@gmail.com